The iterative enhancement life cycle model counters the third limitation of the waterfall model and tries to combine the benefits of both prototyping and the waterfall model. The basic idea is that the software should be developed in increments, where each increment adds some functional capability to the system until the full system is implemented 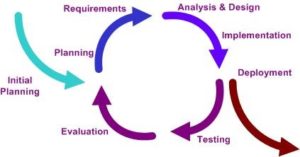 An advantage of this approach is that it can result in better testing, since testing each increment is likely to be easier than testing entire system like in the waterfall model.