In the next lesson we will look at what the computer does when it processes this information, but for now, let’s skip to the next step.

Output devices translate information stored in the computer and present it in a way that humans can understand it. Typical output devices in a computer system are the monitor, speakers and the printer. 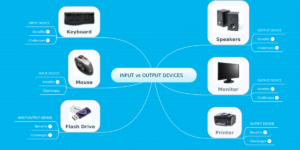 Note: Some devices that perform both input AND output operations are referred to as I/O (input/output) devices and their operations are called I/O operations. Examples of common input and output components are disk drives and modems. A touch screen monitor on a bank machine or a video game controller that shakes when the player is hit can both be considered an I/O device. A CD or DVD burner would also be an I/O device, since it can both read and write data to discs.