What are some different types?

What are some different types?

The bus topology exists when each of the systems is connected in a line, as seen in Figure n this topology, all the systems are chained to each other and terminated in some form on each end. This topology was used in the early days of networking because it was inexpensive to use and relatively easy to set up.

When a packet is sent in a bus topology, there is no intermediary to determine who the packet should go to. Because of this, every packet that is sent in a bus topology is received by all systems on the network. Normally, if the packet is not for a particular system, the computer would simply disregard the packet; however, you can see the security implications of this type of network. If a malicious user were on this network and utilized a packet capture program, he could see every conversation that occurred between machines.

Easy to add systems to network           Can be difficult to troubleshoot 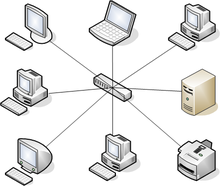 One break does not bring whole network down

The ring topology exists when each of the systems is connected to its respective neighbour forming a ring, as seen in Figure 3. This physical topology has many of the same strengths and weaknesses of the bus topology. The main difference between the bus and ring is that the ring topology does not require termination. Because the systems are connected all together in a loop, there is no beginning and end point as there is with the bus topology. For additional fault tolerance or performance enhancements, you can add a second ring. This configuration is seen in Fibre Distributed Data Interface (FDDI) networks.

If a Token Ring protocol is used in a star or ring topology, the signal travels in only one direction, carried by a so-called token from node to node.

In this layout, every system is connected to every other system. The main advantage of this topology is high availability. The main disadvantage of this topology is cost, both administrative and physical. Because each system is connected to each other, the amount of cabling and maintenance necessary can be prohibitive, especially in larger networks. The formula for determining the amount of cable needed in a mesh network is: 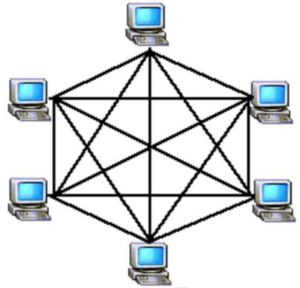 The internet is best described as a mesh network as all computers are interconnected in one way or another which enables such high availability and robustness. 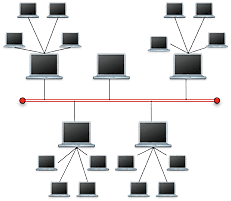